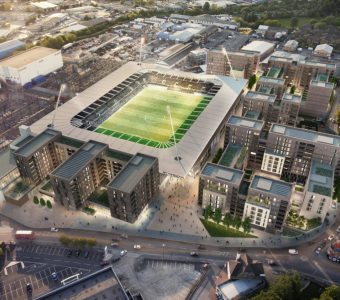 Galliard Homes is currently developing the former Wimbledon Greyhound Stadium, with the car park being redeveloped for high-rise residential usage and the stadium also being demolished and re-built to create the new home for AFC Wimbledon.   GB Card & Partners has recently managed the ground investigation and provided planning and design support for the 6-hectare brownfield redevelopment. The investigation revealed geological features that can create significant risks to construction projects if not fully understood and investigated.  GB Card & Partners were able to design and implement an effective investigation strategy utilising the latest drilling techniques to mitigate these risks and assist in the substructure design.

GB Card & Partners has provided geotechnical and geoenvironmental consultancy services for the re-development of the Wimbledon Greyhound Stadium in the London Borough of Merton. Our role has included designing and managing the site investigation and assisting with the subsequent pre-construction planning and design phases.

At the desk study phase, geological mapping indicated a large variation in the depth to the base of the London Clay and the top of Chalk Group across the site. This is associated with the Wimbledon Fault which traverses the centre of the site. Further research indicated a predicted vertical displacement of 20m to 25m, based on ground investigation data obtained from the Thames Water Ring Main construction and the Wimbledon to Kensal Green National Grid cable tunnel. 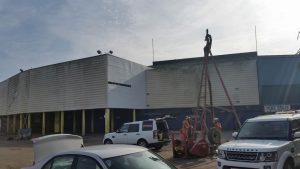 Following an initial investigation comprising deep cable percussion boreholes, the recorded depth to the top of the Lambeth Group below the London Clay varied by up to 29m across the site. A second investigation phase was specified utilising specialist sonic drilling techniques to target the faulted areas, with the objective of delineating the faults and rapidly assessing the strata variation to inform the substructure design. The investigation revealed a series of progressive downthrown blocks within a wider fault ‘zone’, encompassing nearly two thirds of the site area.

For piling works, faulting can create design uncertainty with regard to strata profiling and geotechnical capacity, and also construction risks associated with bore instability and excess water pressures. Working closely with the structural engineer, we were able to assist with the substructure design by optimising pile depths, diameters and layouts across the new residential blocks to retain piles within the London Clay, and avoid piling through the Lambeth Group which contained hard limestone bands and water bearing sand lenses.

The presence of faults is also a particular concern for tunnelling projects, where faults can cause serious construction hazards and maintenance issues, including high groundwater pressures, inundation and excessive ground movement, all of which can occur very quickly if faults are not accurately identified. Indeed, the proposed route for Crossrail 2 between Tooting Broadway and Wimbledon, which runs close to the stadium site, has been heavily influenced by geological faulting. In London, it is now well established that faulting is significantly under-represented by current mapping as new ground data becomes available across the London basin.

It is hoped the information gathered can be shared with Crossrail 2 to assist in the development of their geological model. This project emphasises the importance of undertaking a thorough geotechnical desk study to identify ground risks, and specifying bespoke investigations to develop detailed ground models and reduce design and construction risk.