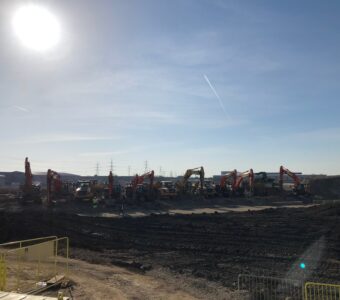 Dagenham Green, an exciting new mixed-use development brought forward by Dagenham Dock Limited and Peabody, has recently been approved by the LB Barking & Dagenham Council, with work now progressing towards the detailed planning submission for the first 935 homes which will be next to Dagenham Dock station and include the first part of the new Urban Park.

The site is the former Dagenham Stamping and Tooling Operations (DSTO), operated by the Ford Motor Company as a vehicle body and wheel works since the 1920s. After some 90 years of operation, the decision to permanently close the manufacturing works was made in 2010. Dagenham Dock Limited (DDL) acquired the site in 2016.

The scheme will include:

GB Card & Partners has been responsible for the work involved in remediating the site, unlocking a significant area of land for redevelopment and helping to ease London’s housing crisis.

Several phases of ground investigation and assessment have been undertaken by GB Card & Partners, both prior to and since acquisition of the site by DDL, as well as a programme of ground remediation enabling works. The works were undertaken via two planning applications, the first relating to the environmental improvement works (which included soil and groundwater remediation) and the second relating to the construction of an engineered platform to raise the site out of the fluvial flood plain.

GB Card & Partners are excited to have progressed this significant development, and we look forward to moving on to the next integral part of the project.

To find out more about Dagenham Green please click here.